A Taste of Freedom

There is quite a lot happening!

October / November is that very productive time for many people in Cape Town. I am practicing trying to be “the still point in a turning world” much of the time, and really thankful for the short meditation practice that I put on the schedule. At 11.45 the busy-ness and business stops. Whoever is there at ReUnion, sits quietly for twenty minutes. It punctuates the day with quiet.
New to being quiet or old hands are all welcome.

I don’t do that much on Facebook. Though there is a page for my YogaForSports, JimHarringtonYoga and ReUnion and it seems unavoidable. I am still not that comfortable sharing my life there, but I have started to get accustomed to these little creative writing spurts that end up as newsletters. People keep telling me that they read them so I keep going. Sharing little bits of my life or my story.

I was in Bangkok in 1992. I had a badly injured knee, a bureaucratic obstacle and not a lot of money.
The obstacle was that I needed to replace a passport that was a temporary one. There is a juicy pre-story but that’s for another day.

My knee couldn’t bend and couldn’t fully straighten but I could walk on the toes with the leg a little bent. The Anterior Cruciate Ligament was torn and it really should have been surgically repaired. Hobbling across some of the roads in Bangkok traffic in that condition was a little hair raising at times.

I needed to stay a while for my passport to come through so I found some work teaching English.
I was missing the islands and the warm ocean. I had spent the past six months exploring and surfing remote reefs off the islands Sumatra.

Spare time was spent learning the local dialects and culture. There was a small subculture of feral surfer kids from Australia, US and France stumbling around the islands of Indonesia and the Philippines searching for adventure and the perfect wave. On flat days we would fish, swap ideas and information on things like nutrition, stretching, treating injuries, maintain fitness for surfing. Some of these guys where my early yoga teachers.

The Surf Travel industry hadn’t been invented yet, and there was no internet, so no surf forecasts. If you wanted to go you had to just pack a mosquito net and go.

There was no job, no boss, no traffic, no worries. Also no credit card, and no travel insurance. I was free as a bird until the first round of Malaria, and shortly after that, the knee injury.  It only took one moment. I made a wrong move on a large wave at Lagundri Bay (Then known as one of the most perfect tubes on the planet).

The ocean took it’s chance to unloaded a tonne of bricks on my head, and folded my knee sideways between me and my board.  I often say the knee is a hinge joint so don’t try to make it a ball and socket. A loud snapping sound told me that my ligaments were toast.

The worst suffering was the three days lying in my hut and watching the point reeling off perfect waves for three days. There was no ice and I hadn’t heard of anti-inflamatories.  I prayed that the leg would get better but it didn’t. I didn’t have the airfare to go home. I would have had to call for a parental bailout.  I had been on the road for two years then, and I wasn’t ready for that.

So I hobbled around in Bangkok and one day on the river ferry, I got talking to some monks. They invited me for tea. I was intrigued by their joyful and peaceful vibe. I guess I had expected a heaviness to go with the austerity of their lifestyle. I remember saying to myself “What are they on? Why so happy?“.

A senior monk gave me this little book called “A taste of freedom” by the venerable Ajahn Chah. Ajahn Chah was a rebel who left the traditional Thai Thera 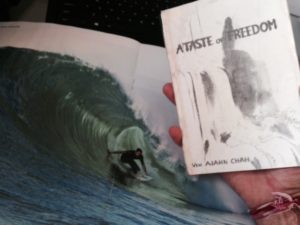 vada System (read this as Buddhism as a religion with all it’s trappings and political hierarchy). He wandered, like the original Buddhaas an itinerant and eventually founded the austere Forest Monastic Tradition in North Thailand.  I read this little book and it all made sense to me like a piece of the puzzle dropping in to place. The yoga exercises had a context now.

I still have the book. You can download it here. On page one of Chapter one “about this mind” he says
“About this mind…in truth there is nothing really wrong with it. It is intrinsically pure. Within itself it’s already peaceful….. “. So unlike the other “isms” that I knew, the essence of Buddhism wasn’t really about believing anything. It only said that there is a psychology of humans that creates pain and suffering and that there is a way out of that. It involved sitting quietly and watching the mind to figure it out.

The senior gave me permission to join in the meditation with the Thai folks every morning at 6am.  We did 45 minutes of guided (in Thai language) slow walking, and then sitting for 45 minutes. I tried hard not to fall asleep most of the time.

I kept to myself in this time, I did yoga asana in my tiny room.  I started to be able to see how manic my mind was most of the time and after a month or so, to notice moments of peace.

It was suggested by a friend that I go train at Wat Suan Mohk – the forest monastery in the south – because they might allow foreigners to stay without taking vows and being ordained. I stayed about 5 weeks, mainly in silence, and learned a method called Annapanasati or “mindfulness with breathing “.

I started to see some of the clarity through the mire of my mind. Just enough to feel deeply happy for no reason and because of that make it very painful to go back to the “real” world. The monks left me with the a blessing and suggestion to go and live in a way that is “useful and peaceful”.

A few weeks later I met my old surfing buddy Ashley on a visa run to Malaysia. I tried to explain to him the bliss of just sitting quietly. His wise words were. “It looks like you are onto something there. I don’t really understand it…but I know one thing, those meditation masters have never surfed in the tube. “ Those words still echo.

That was the next step. Bring it into daily life and keep enjoying life at the same time. It was a lot harder than I expected.

This old story all came back to me because last week I was introduced to Sue Cooper a student in the lineage of the Ven. Ajahn Chah, and a Clinical Psychotherapist of 25 years experience. She has been studying the Dharma for almost 30 years and seamlessly blends Buddhist and Western psychology in her work with groups. My wife and I joined her silent workshop recently. 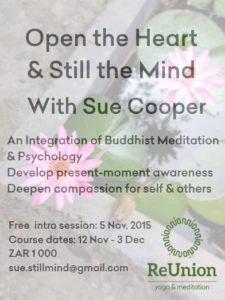 Sue often runs retreats at the Dharmagiri retreat centre in the Drakensburg and at Bodhikhaya. From what I hear, she is really well respected and loved by all. So the great news is that she has brought her Monday night group to ReUnion Studio and we are planning a new short course for November.
There will be a free introductory session on the 5th of November.

Sue’s meditation group will meet on Monday Nights in “the cave” from 5.45 to 8.00pm.  Please contact her to book.

Thank-you for reading.
See you on the mat,
Jim