Why I choose Northern India for my yoga adventures

The other day I was writing to a friend about the retreat to India.  She asked me about the journey, why I take folks to India and what to expect from the retreat.  I wanted to share my response with all of you.

It is hard to describe the “journey” [when you are on retreat] there but it is indeed a journey and each person’s will be unique. It is not so much a yoga “holiday”, but more a yoga adventure.

I set up the training and trip to the River Ganga because I realised that it had been a very powerful influence on my own Yoga journey. I first went to India in 1987, then 1994.  At that time I followed the River Ganges from the sea (at Calcutta) to its source at Kedarnath.  This journey along the river had a strong impact on me.  Initially I moved higher up into the mountains to escape the heat of the summer season, and felt drawn to keep going upwards.  Eventually I reached Kedarnath Templ, considered one of the four Sacred Sources of The Ganges.  (Elevation of is about 3,583 m above sea level).  It was radical, because I experienced and glimpsed at a life lived in a totally different paradigm.

It was my return in 2011 as the yoga specialist with the Delhi Cricket Team that reminded me of the powerful impact that India has.

It was impossible to explain the atmosphere and depth of the places like Rishikesh to and also just the experience of being in India. It is one of those things that just must be experienced first hand.

So the trip is about bringing a group of modern, western yoga practitioners to experience the roots of the yoga tradition and to hear from Indian teachers. East meets West is the theme. I want people to gain a better understanding of how Indian culture, mythology and religion fits (and doesn’t fit) with the Yoga tradition. It will include visits to an ancient meditation cave, waterfalls, some very old temples and sacred sites, as well as the bustling pilgrimage town of Rishikesh. 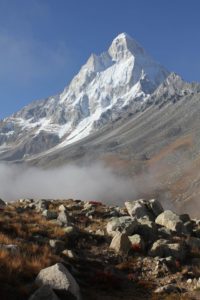 In Yoga it doesn’t matter about being Western or Eastern in culture. Culture, background and race become unimportant identifiers when you stand as simply a small human in front of the Grand old Himalayan mountains and it’s River .

The element of Nature,  is essential and part of the tradition.  For the first six days we are at this 100 year old traditional ashram, five kilometers upstream from Rishikesh.
We have been really fortunate to connect with some authentic teachers of asana, pranayama and meditation from a lineage of Himalayan Yoga masters. Aditi M Gaur and Ragavendra Adigaji who are part of the Himalayan Institute.

Ragavendra-ji is a student of Swami Rama, founder of the Himalayan Yoga Institute.  Ragavendra-ji is a senior teacher, who is able to explain with great clarity, the wisdom of the Yoga Sutras of Patanjali as they apply to our practices of yoga and meditation. While there are many authors and teachers who are able to discuss and speculate about the meaning of these texts, and in some sense there is value in keeping the questions open ended, it is rare to find such a direct, and clear application of these ancient verses.

Ragavendraji’s explanation of the Sutras were a practical and reliable interpretation that comes not from speculation but from a long lineage of masters who have used the Sutras as a practical guide to working with mind (Raja Yoga).

Aditi is an initiate of the Himalayan Yoga Tradition and student of Swami Veda Bharati.

The daily routine of the retreat is generally something like this.

Meals at the ashram are in silence according to Ashram policy, and we may choose to conduct parts of the retreat in silence to allow space for deeper contemplation, being with personal thoughts and to assist the meditation practices.

If you would like to join this yoga adventure, please get in touch with us to find out more information.